These maps have become almost legendary in Coast to Coast walking circles. Originally produced by the Ordnance Survey, they show a small strip of 1:25,000 scale OS map detail along the length of the C2C route. These map sections are supplemented by some of Wainwright’s words and pictures, making them an ideal substitute for carrying the full set of OS map and Wainwright’s guide book. This page is largely for historical interest now, as several years ago, the Ordnance Survey stopped producing the maps, and they are almost impossible to get hold of.

Old stock in bookshops across the country became highly sought after, there was a thriving second-hand market and copies were selling on eBay for £30 each. Internet walking-related message boards filled with requests for the maps and those that managed to find them in out-of-the-way locations, published the addresses of these little gold-mines. It would seem that these tiny seams have all played out now and the stock has finally been depleted. 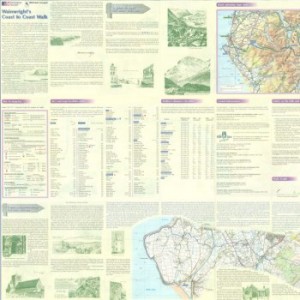 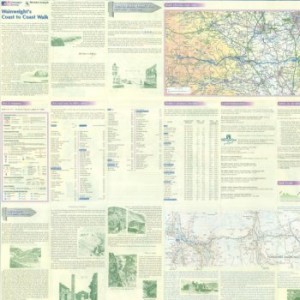 Some time ago, Walking Places was kindly sent an electronic copy of the maps, from a concerned reader, and these are now available by clicking the thumbnails on the left of the screen. Each link will download a ZIP file, containing two PDF files, one for each side of the double-sided maps. You will need a program to open the ZIP files (such as WINZIP) and a program to read the PDF files (such as Adobe Reader).

There are an increasing number of places where you could go to print these maps. The size of them prohibits most high street printers from producing them, but there are places on the Internet that could be used should you really want to have a copy of them. They are reproduced here for novelty value only and if you want to walk with a strip map then the Harvey map will satisfy most people.

For a long time, the reasoning behind the decision by the Ordnance Survey to terminate the publication of these maps was something of a mystery. The more cynical decided it was a financial decision. The two strip maps would now need to be replaced by eight OS 1:25,000 scale Explorer maps (see Other Maps) if one was to use the same scale of mapping to walk the whole route. The popularity of the walk made the difference in price between two strip maps and eight Explorer maps quite a significant amount of money.

However, the mystery was finally resolved by a reader, John Daly, who wrote to the Ordnance Survey and asked them why they decided to end the publication of these maps. Surprisingly, the OS responded to John with the following:

“The maps that covered Wainwright’s Coast to Coast walk were published as a joint venture with Michael Joseph (part of Penguin Books) as a compliment to their Wainwright guide book series. However in 1999 Ordnance Survey made the decision to withdraw from this type of co-publishing activity, and in consequence the publishers jointly decided not to invest in developing the products or in printing any new stock. Both of the existing stocks were allowed to run until they were exhausted, which occurred in March this year (2002). Neither Michael Joseph or Ordnance Survey have any plans to resurrect or continue with these products.”

Thanks to John for sharing that with us.